I am woman, hear me ROAR!

Last night was my daughter’s first rugby game, and let me tell you, she was FIERCE! She threw herself into the game just the way I knew she would – with her whole heart and body. She dug her feet in and pushed with all her might against the opposing team in the scrum (what you see in the photo – but that’s a borrowed photo and not her team). She pummelled any opponent who dared to run by her carrying the ball. She dashed across the field whenever the ball was tossed to her… and she SCORED! In the last seconds of the game, she made it across the line to score her very first “try” (like a touchdown in football) in her very first game.

I thought I would be scared to watch her (this is the girl who tore a ligament in her knee and had to have surgery because of a soccer injury – partly because she is such an intense player), but the truth is I LOVED IT!

I’m a little ashamed to admit this, but I used to be afraid of her fierceness. I used to think it was my job as her mom to help her cage it in some way. I used to cringe when I’d watch her get fouled out in basketball or get penalties in soccer. It was hard to watch that fierce look in her eyes when she’d throw her passion into a sport, because I was afraid she’d get hurt or that she’d hurt someone else. I’d tell her, when she’d come off the field, “can you be a little less vicious? Tone it down a little.”

But now? I am thrilled for her that she has found a sport that honours that fierceness in her. I told her last night, “Honey, don’t ever lose that fierceness. Find healthy ways of using it, but don’t ever let people tell you it’s wrong.”

Because I realized something last night as I watched her. Somewhere along the line, I let my fierceness be caged. I let the expectations that I be a “nice girl”, a “well-behaved girl”, a “quiet girl” put me inside a cage and it is taking me years to break out of that cage. Even now I still fight those bars, trying to break out into freedom. Even now I keep silent when I should be shouting, I make choices that limit me because I don’t want to hurt people’s feelings, I tell little white lies because I hate offending people with the truth, and I bottle anger inside because it scares me.

After the rugby game last night, I read Ronna Detrick’s magnificent post about the vision, the roar, and the muse and I knew what I needed to do. I need to ROAR! I need quit trying to bottle the fierceness inside me. I need to quit letting myself believe I have to be polite and nice and never hurt anyone’s feelings. I need to challenge those people who dare to bottle my truth just because it scares them. I need to let my inner warrior CHARGE forward with courage and strength.

This morning, as I ran, I had a flashback to the birth of my second daughter. In the depths of labour, after I’d let out a fierce, primal scream, a nurse told me, with a measure of impatience, “if you keep screaming like that, you’ll have no voice tomorrow.” Instantly, I went to that place I go when I’ve dared to step out of the role of “nice, respectful, quiet” girl and someone calls me on it – I went to shame. I bottled the next scream deep inside because I didn’t want to cause anyone annoyance, I didn’t want to embarrass myself, and I didn’t want to risk tomorrow’s voice.

But you know what? Later, after I held my daughter in my arms, I thought, “BULLSHIT! WHY would you tell a birthing woman to keep silent? If you can’t scream in childbirth, when CAN you scream? And what kind of nonsense is not screaming today because it might hurt your voice tomorrow? If today needs a scream, well then, dammit, SCREAM!”

I can’t go back to that moment and let out that next scream I bottled, but I can choose to not let anyone bottle the next scream that needs to erupt from that primal place in me.

I will not be silent anymore.

I will not let my fierceness be caged.

I will challenge old paradigms of leadership and write books about new and scary ideas, if that is the scream that needs to emerge.

And I will sit on the sidelines and CHEER as my fierce daughter charges headlong into a sport that may very well hurt her. Because DAMMIT if she can’t relish her fierceness now, then some day she will be lying in a hospital bed and letting a nurse silence her primal scream.

The naysayers won’t hesitate to tell you how tough life can be with a teenager (or two) in the house, how they talk back and have little doubt that they’re smarter than you, how their attitudes quickly outgrow your ability to be patient, how they turn dark and moody over the slightest provocation, how they would rather hang with their friends than families… BUT… they never seem to tell you how much fun it can be to have them around.

She turned 14 today, and I am still head-over-heels in love. She makes me laugh almost every day. She’s got a sense of style that puts Tyra Banks to shame. When she’s feeling confident (which she often is these days), she glows with beauty and self-awareness. She is fiercely loyal to her friends, but she still likes to hang out with her mom. She’s got a mind for history and she’ll spout off random historical facts about people as diverse as Marilyn Munroe or Ghandi. She’s become almost obsessed with keeping the house clean and picks up after her younger sisters more often than I do (how lucky am I!). She hates handing in anything late, so she’s never had to be told to do her homework. Seriously – not once! She’s never met a mirror she doesn’t like. She loves to run and there are few things more beautiful than watching her do it. She is fiercely competitive in sports and will stare an opponent down even if they’re much bigger than her. She’s got amazing focus when something is important to her and more self-discipline than I will ever have. Despite how hard it’s been, she’s shown remarkable grace and resilience this year while she’s had to wait for her knee to heel before she can return to her beloved soccer. She’s the cooperative kid in the class that every teacher likes and we’ve never had to sit through uncomfortable parent-teacher meetings with her. She makes me marvel every single day that I am lucky enough to be her mom.

Hard to believe that fourteen years ago, she made me a mom. Happy birthday, my beautiful Nicole.

I should have been on the sidelines of the indoor soccer field last night, watching my agile, long-legged, beautiful daughter sprint across the field after the ball, doing her skip-step whenever she kicks it into high gear, weaving in and out of the opposing players with awe-inspiring skill (yes, I’m proud of her – how can you tell?), adding another goal to her growing total for the season. Oh how I would have liked to have been there.

Instead, I sat in the emergency room all evening, watching my agile, long-legged, beautiful daughter sitting in a wheelchair looking bored, disappointed, and uncomfortable.

Nikki fractured her ankle yesterday. For the next month or two, instead of sprinting across soccer fields, she’ll be limping along with crutches and a cast. It’s rather disappointing timing, with fun Christmas plans that include a trip to a waterpark, probably some bowling, a soccer tournament that she was invited to join with the developmental team, and lots of playing with visiting cousins, etc.

She’s a trooper, though, and she’s handling this all surprisingly well. She’s tough and independent. She hurt herself playing soccer in gym class at 9:30 yesterday morning (“Mom, I think I heard something snap”), limped around school all day, and didn’t even call me until almost 3:00 in the afternoon. Then, because it was too late for me to go get her, she managed to get herself home on the school bus.

She’s pretty determined not to ask for much help for anything either. When I dropped her off at school this morning, her teacher said “I’ll get the other kids to help her out with stuff.” And I said “good luck with that. She won’t very easily admit she needs their help.”

She was in a reasonably good mood this morning on the way to school, but I’m a little afraid that tonight, once the novelty of wearing a cast wears off, she’ll be a very sad girl. 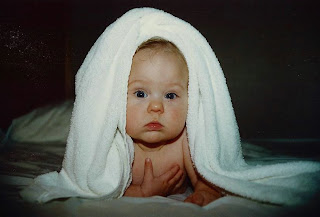 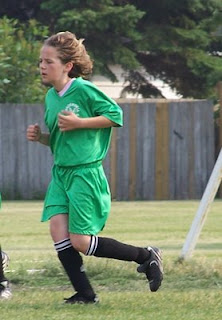