How deep are you ready to go? 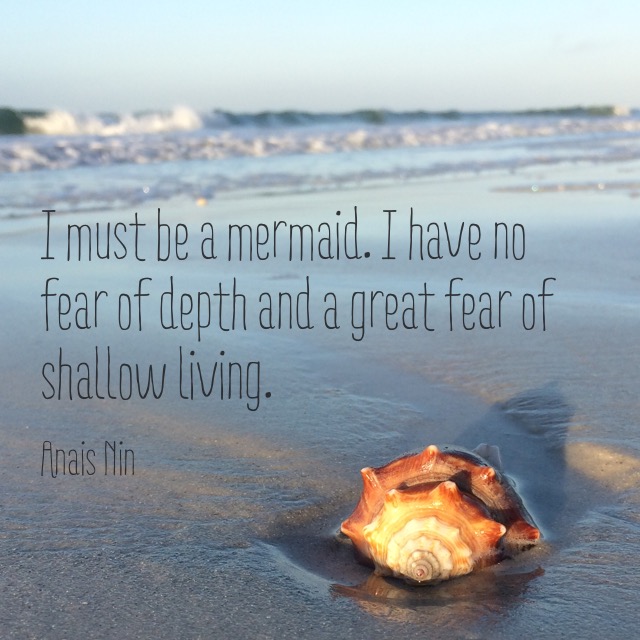 “How do I know if I’ve gone deep enough?”

That was a question that came up during the Soulful Year virtual planning session on Saturday. It was asked in relation to an exercise that invites you to reflect on the grief, grace, gratitude and growth of the last year and then to release it so that you are ready to receive the year ahead. (You can find the exercise here.) The person asking it wanted to make sure she’d done a good enough job of processing what had happened in the past so that it wouldn’t get in the way of the future.

“Instead of asking ‘have I gone deep enough?’” I said, “ask yourself ‘have I gone as deep as I’m prepared to go right now?’”

“There will always be another layer,” I continued, “and perhaps when you’re working on another exercise this afternoon, something else will come up for you that you’ll want to add to this mandala. That’s okay. You can always go back. Just go as deep as you can right now and trust that, if there are more layers to uncover, those will come up at the right time.”

Here’s a story to illustrate the point…

Last weekend, I was decluttering and re-organizing my laundry/storage/pantry room in the basement. It’s one of those catch-all places for everything that doesn’t fit in the rest of the house, so it holds a lot of clutter. I hadn’t thoroughly cleaned it in a long time, so there were storage bins in it that still held clothes that haven’t fit my daughters since the early part of the century.

By the end of a weekend of hard work, it was still pretty full, but everything fit on the shelves or under the stairs. I was satisfied that I’d gotten rid of everything I could. At the very least, there were no clothes left that don’t fit someone in the family.

A few days later, I was sitting at my computer trying to prepare material for an upcoming course and becoming increasingly frustrated with how stuck I was. Nothing was flowing and no new ideas were showing up. In exasperation, I pushed away from my computer and paced around the house.

Almost by accident, I found myself back in the laundry room staring at the shelves. I yanked a Christmas wreath off the shelf and realized I hadn’t hung it in ten years and probably never will again. I was tired of it. It spoke of another era when I loved to play with pine cones and hot glue. I stuffed it in a garbage bag. Then I started pulling storage bins from under the stairs. One of them was full of dried flowers. Another held a half-finished knitting project and bags of moccasin-making supplies. A third held a handful of other half-finished craft projects and the leftover supplies from a dozen finished projects that I might want to do again someday.

I’d hung onto them because “you never know when I might want to make another pair of moccasins or a dried flower arrangement”.

The truth is, though, I won’t ever make another pair of moccasins or dried flower arrangement. That’s just not my style. I get really interested in an art form, pour my heart into it, and then abandon it when something else catches my attention. In all of my nearly 50 years on the planet, I have never gone back.

The boxes are still there because I’ve been carrying around a story about myself that that is a weakness. I was convinced that some day I’d fix that part of me and become a better person who finishes every project and doesn’t lose interest in things that bore her. Suddenly, standing there staring at those boxes full of craft supplies and shame, I was ready to release that old story.

Here’s a new story… I like to explore. I like to try new things. I am a scanner who loses interest in what I’ve tried in the past because it no longer challenges me and I crave something new.

Giving up on craft projects because they bore me does not make me a bad person.

Finding delight in new ideas every six months does not mean that I’m fickle or wishy-washy.

I packed it all up and gave it all away. And suddenly I felt something physical shift in my body – like something had been blocking my airwaves and suddenly I could breathe again. And, as if I’d planned it, Jann Arden’s song started playing from the music player on the washing machine… “So I’m punching out walls and tearing down paper, cutting my bangs, yeah sooner than later, I’m selling my soul right back to Jesus, taking up hope and giving up weakness, untangling the strings… I’m free, yeah. I’m free.”

Here’s an important part of this story… Just like I didn’t need to be ashamed about those unfinished projects or old stories, I also don’t need to be ashamed of the fact that it took me so long to release them. I wasn’t ready until now. I went only as deep as I was prepared to go at the time, and then, when something coaxed me to take another look, I went deeper.

Go only as deep as you’re prepared to go right now. There will be time for going deeper at another time.

I’ve been inspired by a few of the participants in my Mandala Discovery program who signed up for the program a few years ago and have worked their way through the exercises three or four times since. Each time they do them, they gain something new and take their learning to a new depth. What showed up in the third or fourth pass couldn’t have showed up the first time through. They weren’t ready for it then.

Not long ago I had a conversation with a residential school survivor who testified at the Truth and Reconciliation hearings. “I told them about the physical abuse,” she said, “but I wasn’t ready to talk about the sexual abuse. Those stories will have to wait for another time when I’m ready to share them. They still feel too raw.” I was struck by her wisdom, trusting herself to know what felt safe to share and what needed more time in the tender places of her own heart.

This wisdom is true for personal growth, it’s true for interpersonal conflict, and it’s true for community-building. Whether you’re dealing with your own issues or wrestling through things with others, it’s important to pay attention to what level of depth feels right in each particular moment.  Sometimes it doesn’t feel safe to go any deeper, sometimes it’s just not the right timing or you don’t have time for the deep dive, or sometimes you haven’t found the right container that can hold the complexity of the depth you need to dive to.

Recently I was having a conversation with a colleague and we were talking about some upcoming training we want to offer in The Circle Way. We were contemplating whether to offer a two-day session or a deeper dive in five days. One of the questions we were asking ourselves was what depth we felt the potential participants might be ready to go and what depth of conversation they might be ready to hold. The Circle Way is one of those practices and containers that can offer value at a rudimentary level or can hold really complex stories, emotions, conflict, etc. at a much deeper level. Again, it depends of the level you’re prepared to go or the length of time you have for the dive.

It all comes back to the spiral. Again and again, whether it’s in our own personal growth or the growth of our communities, we spiral through the layers of what we need to learn, going deeper and deeper until we reach the core. Just like a path straight up a mountain would rob us of our oxygen, a straight path to the depths of our learning would strangle us.

If you’re ready to go deeper, to find the next level of the spiral, then find the right container that can handle the dive. A “container” can be offered by a trusted friend, a therapist, a coach, or a sharing circle – whatever person or group of people holds space for you and makes you feel safe enough for the dive. Or it can start with a set of tools and creative exercises like Mandala Discovery or The Spiral Path (in both cases you have access to a community of people who are working through the program at the same time).

Consider the container like the oxygen mask and wetsuit of a deep-sea diver – the deeper you go, the stronger your equipment needs to be.

When you’re ready, take the spiral path to your own growth. It will lead you through the layers at the speed that you’re ready to uncover them.