On Tuesday, I had one of the most productive days I’ve had in a long time. I worked hard all day on the changes to my website, hoping to launch the next day. But life had other plans.

At about 3:30 on Wednesday morning, I woke up with an odd combination of back pain and nausea. I got up and walked around the house, thinking it was just a gas bubble that needed to work itself out. It didn’t. The pain got worse. Much worse. I woke my husband and we headed to emergency.

What followed was five hours of the worst pain I’ve felt in my life, followed by hours of waiting in the emergency room, being sent home with a “probably gallstones” diagnosis, coming home the next morning for an ultrasound followed by more hours of waiting, and finally a confirmation that I have gallstones and will probably have to have my gallbladder removed. The next step is a meeting with a surgeon.

During yesterday’s wait in the middle of the emergency room, my mind was no longer numbed by the pain of the day before, so I did some people-watching. I came to the conclusion that an emergency room may be the best environment to spend some time if you’re seeking interesting characters and storylines for a novel or movie. It’s so full of the frailty, vulnerability, and strength of the human condition.

There was the guy brought in by two long-suffering police officers (who warned me not to sit near him), who was clearly drunk and suicidal, whose wife (evidently the reason for the police) joined him in tears later in the day when he was a little more sober.

There was the stoic but suffering woman with gallbladder symptoms whose kind-looking husband was walking their three week old baby in the hallway, hoping the baby would take a bottle if necessary because breastfeeding hurt far too much.

There was the gracious and soft-spoken older gentleman who didn’t want to be a bother; who didn’t think his recent cancer was worth mentioning in reference to the swollen leg that brought him in and who didn’t mind that the nurse had to poke him twice to draw blood and then come back for the third and fourth because she’d forgotten about one test. And there was his wife who brought him coffee and donuts and showed concern for me that I had to wait so long.

And then there was the 80-something-year-old woman with a huge bloody wound on the back of her head; who was lost in her dementia-addled mind; who took out her anger on her weary but patient children when they tried to keep her from wandering in the halls and getting in the way of the doctors and nurses. And there was her granddaughter, a nurse at the hospital, who took over the duty of following her around the halls during her lunch hour.

No, it wasn’t a fun place to spend a couple of days, but I came home feeling a little more softened and openhearted, reminded that each person we meet is carrying stories we know nothing about.

Maybe it was because I was already focused on connection, building a new website with that theme, that made me recognize in each of those stories a longing for connection. 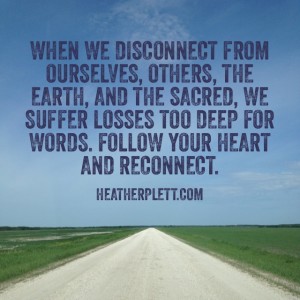 There’s a deep sense of disconnection that makes some people turn to alcohol and other addictions, or even suicide, when their lives feel empty, lonely and unfulfilled.

There’s a longing for connection that leads to marriage and parenthood and breastfeeding and wandering in the hallway to ease a newborn’s tears.

There’s the kind of deep connection that keeps us from abandoning those we love long after they no longer remember our names and they face us with more anger than love because they no longer live in connection with their own minds.

There’s the lack of connection with our own bodies that makes us turn to self-destruction and neglect when we feel sad and afraid and we don’t recognize what we really need.

The more I pay attention to people’s longings – the more I host retreats, coach individuals, teach classes, and people watch – the more I see that at the heart of every longing is a basic human need for connection. We are not meant to live disconnected lives. We are not meant to walk around like drones, spending our days doing work that shrivels our souls to pay for things we don’t need to impress people we don’t like.

If you’re feeling disconnected, maybe this is the right time to seek those deeper connections. Maybe it’s time to admit to yourself what you’re really longing for.

I welcome you to wander around my new website, read some of the new pieces I’ve written about connection and circle and then consider seeking the connections you long for by working your way through Pathfinder, Summer Lovin’, or Lead with Your Wild Heart. Or sign up for Mandala Discovery or Openhearted Writing Circle in the Fall, or join the next Pathfinder Circle. For even deeper conversations, perhaps one-on-one coaching is what you’re looking for.

In the meantime, I am grateful that your longing for connection has brought you into relationship with me!