Walking each other home 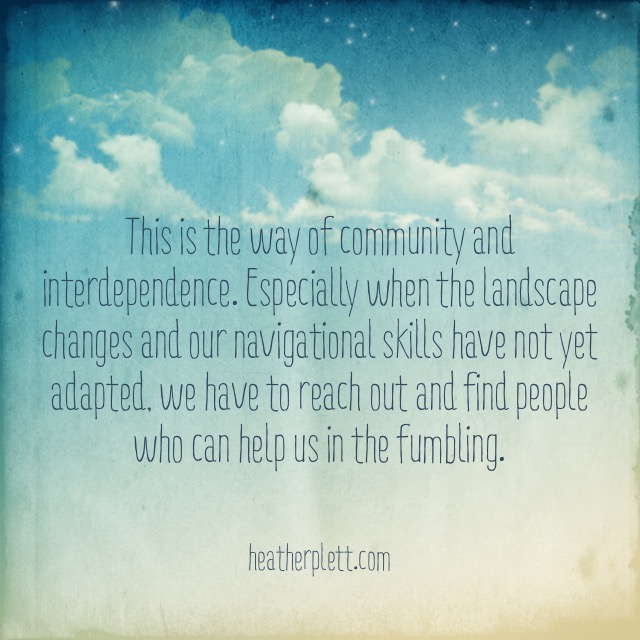 I had an experience earlier this week that won’t leave me alone. This is my first attempt at giving meaning to something that I may still be processing weeks from now…

I had left my vehicle parked on the street and was walking toward the restaurant where I was meeting a friend when I came across a blind man, stumbling over snowbanks with his white cane. It was clear that he was disoriented and was having a great deal of trouble navigating his way down sidewalks that have not yet been cleared of the foot of snow left behind by a blizzard on Boxing Day. His cane was tapping the edges of the narrow paths other people’s footsteps had left in the snow, trying to make sense of a landscape that was very different from what it was just two days before.

I was running late, but I knew I couldn’t, in good conscience, walk past without offering support. “Would you like some assistance?” I asked.

“Yes,” he said. “I stepped off the bus and got turned around and now I don’t know which way to go.”

“Where are you trying to get to?” I asked.

“Home,” he said, with some anxiousness in his voice. “I need to find my way home.”

“Where do you live?”

He gave me the address, but I wasn’t quite sure which street he was talking about. There are two streets in that neighbourhood that always mix me up.

“Do you know any landmarks? Buildings close to your home that might help me figure out the direction we need to go in?”

“It’s not far from the firehall,” he said.

“Oh – I know where the firehall is, but you’re going the wrong direction. Follow me.” He put his hand on my shoulder. We’d only gone a short way when I could tell that there was something wrong.

“This doesn’t feel like the right direction,” he said. “Can you see a short apartment building close to us?”

“No, I can’t see that from where we’re standing. But if it’s close to the firehall, it must be in this direction.”

“I need a phone,” he said, the frustration and distrust of my abilities growing in his voice. “I need to call my worker. She’ll come out and get me.”

I pulled out my phone, dialled the number he gave me, and spoke to his worker. She said she couldn’t come out to get him and wasn’t able to give me much more helpful information than he could give. “It’s close to the A&W,” she said before she hung up.

“She won’t come out,” I told the man, whose name I now knew.

“She HAS to come out. It’s her job! She’s just being stubborn. And she’s not from here so she doesn’t know her way around.”

“I can see the A&W from where we’re standing,” I said.. “We’ll figure this out. Let’s head back in the direction we came from.” We started walking, once again with his hand on my shoulder, slowly navigating the narrow path that wove between snowbanks and over the frozen hills snow plows left behind.

He hesitated when I started to turn the corner toward A&W. “It still feels like we’re going in the wrong direction. I think my building’s across the street. On the same side of the street as A&W, but across the street from where we are now.”

What he said made no sense to me and I could tell he was getting increasingly flustered.

“We’re just going to keep walking until we find your place,” I said. “I’m not going to leave you until you’re at your front door. We’re on the right street now, and once I can see some street numbers on buildings, we’ll find it.” (In case you’re wondering why I didn’t look on Google maps, it simply didn’t occur to me until it was over.)

We started walking, I finally found a road sign and a street number that narrowed down the search, and after a few more hills and narrow pathways, we were at his door.

“Thank you,” he said as he opened his door.

“Happy New Year,” I said and went to meet my friend.

I can’t get that brief encounter with the blind man out of my mind.

First, it was the reminder of my privilege as a person with sight that struck me. I walk around this city in the winter time, navigating the snowbanks and the frozen bits with some degree of challenge, but never giving much thought to how much more difficult the journey would be if I didn’t have sight. What if all of the things you normally rely on as a person without sight – your memory of the feel of the sidewalk under your feet, the edges of buildings and curbs, and the sound of your tapping cane reverberating against walls – are suddenly wiped out by the blanket of snow?

How would I learn to navigate if the landscape suddenly changed and none of my abilities had yet adapted to the change?

But there is more to this story that is still formulating in my consciousness.

What does it mean to help someone find home? To be the blind leading the blind? To be one lost soul on the street helping another lost soul get back to where they belong?

Today, when I shared this story on a call with The Helpers’ Circle, someone reminded me of the Ram Dass quote… “We’re all just walking each other home.”

Yes, that’s what we were doing. In my stumbling, bumbling way, I was walking him home. He didn’t have much reason to trust me (especially after my first failed attempt) and yet I was his best option. In turn, by teaching me a different way of seeing and navigating the world and helping me to pause and be more present for my surroundings, he was walking me home too.

Each of us had bits of the necessary information – one with sight and one with memory, intuition and prior knowledge – and together we stumbled our way toward home. When I started out with arrogance and too much confidence, sure I could find the way because I had sight, we ended up more lost than where we started. Together we had to stop on the street, sink into our shared lostness, and slowly build a map from our shared abilities.

This is the way of community and interdependence. Especially when the landscape changes and our navigational skills have not yet adapted to a new way of traveling, we need to reach out and find people who can help us in the fumbling. Those people may be just as lost as we are, but when we pool our resources, together we’ll find home.

This idea of finding home seems to have infiltrated my subconscious, because last night’s convoluted dreams were all about finding home. For the first part of the dream, I was suddenly homeless and had to find a place to live. I visited several apartments, hoping to find one that suited my needs. Later, in what seemed like a separate dream, I was living temporarily with someone else in a huge home with many rooms, none of which seemed to be mine. When I came down to dinner, there were two tables set – one was for me and my host and another was for any homeless people who happened to wander in off the street. I was about to eat at the table set for the homeless, but then my host said there was a place for me at her table. She was offering me a little bit of home in the midst of my homeless state.

As we near the end of 2016, a year in which the political landscape suddenly shifted dramatically, I sense that there are many people in the world who feel like that blind man, disoriented and fearful in a world they no longer now how to navigate. Collectively, we’re tapping our canes against walls, feeling the edges of the snowdrifts, trying to figure out why home suddenly feels so foreign and far away.

There are people out here on the street with us, but they’re just as lost as we are and we’re not sure we can trust them. What if they take us down the wrong road and we end up even more lost than when we started?

We who are lost need to find each other. We need to cling to each other in our lostness, pool our resources and our information, and stumble our way down unfamiliar streets together. Somehow, we’ll find our way back home.

Are you fumbling your way into 2017, feeling like you’ve lost your navigational tools? Here are a few resources that might help.