Finding her voice: A quest for healing in the family lineage 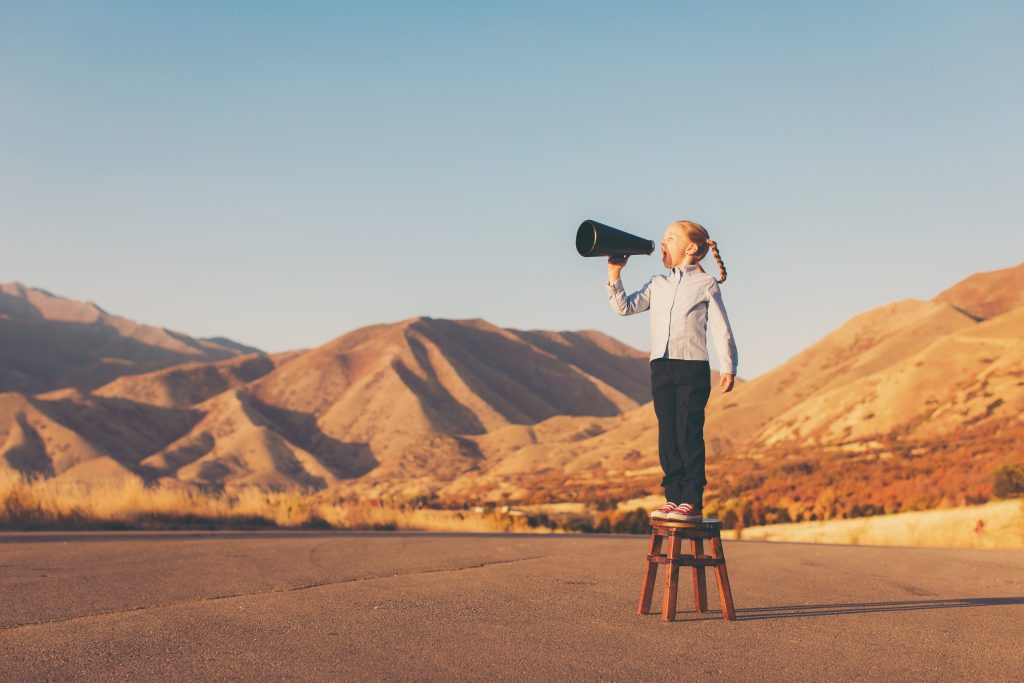 “When one woman doesn’t speak, other women get hurt.”
― Terry Tempest Williams, When Women Were Birds

“When I get my grad pictures taken,” my daughter Maddy said yesterday, “I want to have one taken where I’m holding a megaphone.” She graduates from high school in June. She’s hoping to buy her own megaphone before then, just because it’s something she feels that she should own.

Last week, while I was away in B.C. leading back-to-back retreats, Maddy was at home using her voice and learning to use a megaphone. As one of the leaders of Manitoba Youth for Climate Action, she’d helped to organize two major events – a die-in for climate action (with hundreds of youth pretending to die on the steps of the Human Rights Museum, to represent those lives being lost to climate change), and a climate strike (with 12,000 people participating in our city). Each day I’d get text messages from her with videos, photos, and multiple links to media interviews she’d done. In one of those news clips, she can be seen leading the marchers in a chant, megaphone in hand (video at the bottom of this link).

It was that short clip – my daughter shouting into a megaphone in front of thousands of marchers – that moved me to tears. The fact that she not only had the courage to USE her voice at seventeen (to speak on behalf of a planet that has suffered because of the greed and carelessness of many generations before her) but to AMPLIFY it was remarkable.

Not long before that, at a retreat on Holding Space for Yourself, I’d spoken about the ways that we, especially as women, keep ourselves small and hold back our voices. This wasn’t a “shame on you for being silent” conversation – it was an acknowledgement of the trauma, shame, and silencing we face and that generations before us have faced – all of those stories we carry in our bones, our hearts, and our bodies that tell us we are not worthy of having our voices heard and that we are in danger if we speak too loudly.

When I was Maddy’s age, I was still tangled in the grip of those influences in my life that told me that my voice had little value and should never be amplified. I remember, for example, simply wanting to read the scripture from the pulpit in the tiny rural church I grew up in (not even sharing my OWN words, but reading GOD’S out loud) and being told (by my father, who was the leader of the church at the time) that women weren’t allowed to do that. I KNEW I had leadership capacity and I KNEW I had something to say, but again and again I heard that that was a space reserved only for men.

That belief, seeded deep into my psyche, stayed with me for a long, long time, and even now, at fifty-three, I still have moments of sell-doubt when I know the old messages need to be rejected all over again. I spent most of my career, in fact, in service to that deep-seeded belief. Though I knew I had things to say, I spent the first half of my career working as a communications professional, teaching OTHER people how to communicate, helping OTHER people perform well in media interviews, putting words in OTHER people’s mouths by writing their speeches for them. I was the expert in communications, but rarely did I get to speak.

My job was to pass the megaphone to everyone else and to make sure they sounded good when they used it. Just as I’d been taught so many years before… “a woman’s role is to serve quietly in the background, letting the men have the shining roles.”

A few weeks after my mom died, I wrote a post about women’s voices. In it, I talked about how it was challenging to find my own voice, given the messaging I’d received (a lot of which, sadly, came from my mother) about the lack of value of that voice.

From that post: In recent years, while I’ve been growing my body of work, I’ve had a hard time sharing what I do with my Mom. Some things – like the teaching I do at the university – was fairly easy for her to grasp, but other things just didn’t make sense to her. For one thing, she remained committed to a Christian tradition that frowned upon women in leadership, so when I started teaching women how to lead with more courage, creativity and wild-heartedness, it didn’t really fit with her paradigms.

There was a time when it made me angry that my mom, who should have been my greatest advocate and ally, contributed to my silencing and the shame and fear I had to wrestle with in order to speak, but I don’t blame her any more. Years of healing work have helped me to understand how much she herself had been silenced and shamed and how much she felt responsible (though it was largely unconscious responsibility) for protecting me from the harm that comes to women who speak.

In the seven years since that post, I’ve learned a lot more about internalized oppression and trauma and how we adopt the language and behaviour of the systems that oppress us to silence, gaslight, and shame ourselves. It’s what keeps us submissive, silent, and in service to those who have more power. And then, because we’ve been well trained in it, we do the same to our offspring – passing down the oppression from generation to generation to generation.

I’ve also been learning more and more about trauma and how it’s intricately intertwined with oppression. I recognize it in myself every time I begin to speak of things that threaten to disrupt the status quo – my throat begins to close up, my body trembles, and I know that my flooded nervous system is trying to convince me to RUN! PROTECT YOURSELF! YOU ARE NOT SAFE HERE! It’s trauma from my own youthful attempts to speak and it’s trauma inherited from generations and generations of women – some of whom were branded as witches and burned at the stake for the very things I now speak of.

No, my mom is not to blame. Her silence, insecurity, and shame were all deeply embedded in the training that she, too, had received. That was all she knew how to pass down to her daughters.

My dad is also not to blame. He, too, was playing the role he’d been taught to play and held his own fear of how deviating from that role might bring harm to him and his family. (I remember the way he agonized about saying no to me when I wanted to speak – I’m certain he WANTED to let me.)

My parents were doing the best that they knew how and I love them for it. I love them for the many ways that they DID support me – the curiosity that my dad helped to foster in me, the way my mom modelled how to hold space long before I knew the term, the way they both encouraged me to read and learn and be open to other people’s views.

This post started with my daughter Maddy and I want to end there. I was moved to tears by the video clip of my daughter with a megaphone partly because of the pride I feel for her and partly because the healing work I’ve done has disrupted what’s being passed from generation to generation. THAT is something to celebrate.

She can claim her space and use her voice at an early age partly because she has inherited less of the baggage that prevented me from doing the same. Her voice now rings loud and clear with all of the other youth around the planet calling on us to disrupt the systems that are destroying our planet. (It’s not lost on me that the disruption of patriarchal oppression allows youth to rise up to call for further disruption.)

It still takes courage for her to do what she does (and I take credit for none of that – SHE did this, not me), but at least she started out on more sturdy ground.

This is why I believe that the work of holding space – where we dive into trauma, oppression, generational wounding, power, privilege, etc. (especially in Module 4 of the program) – is so critical and this is why I believe we must hold space for ourselves so that we can better hold space for others. This isn’t just about creating spaces for meaningful conversations – it’s about LIBERATION. It’s about DISRUPTION. It’s about COLLECTIVE HEALING. And it’s about changing the patterns so that we can free ourselves from dysfunctional systems.

If you have healing work to do to be liberated from what you’ve inherited, know that you’re doing it not only for yourself, but for the generations that come after you.

The more we can hold space for ourselves in this healing, the more we can work collectively to disrupt the systems that keep us chained.

Want to join me for the Holding Space Practitioner Program? The next session starts October 28, 2019.

p.s. Maddy has given permission for me to talk about her in this post.